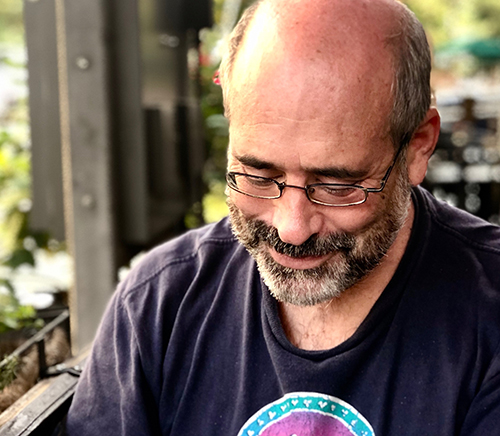 After graduating from the University of Michigan with High Honors in English/Creative Writing, Mark spent many years backpacking through Latin America, focused on experiential learning, especially in Chile, where he translated Neruda on a rustic ranch near the coast. He became friends with Chilean poets, scholars, and members of the Neruda Foundation. Upon his return, he was awarded a fellowship to earn a Masters in Latin American Studies from Stanford University. They subsequently named him a Visiting Scholar to continue his scholarly and creative work on Neruda.

Mark has been following a literary camino Nerudiano for the past two decades. On July 12, 2004, which would have been Neruda’s 100th birthday, Eisner was interviewed on NPR’s Morning Edition, reading Neruda’s poetry to millions. That evening at an overflowing Theater Artaud in San Francisco, he helped host what the San Francisco Chronicle called “a perfect birthday party.” Among the elements was the screening of a cinematic exploration of the poet that Eisner produced. It won the Latin American Studies Association’s Award of Merit in Film. This original film serves as the seed for a more ambitious version.

In 2018, Ecco published Mark's NERUDA: The Biography of a Poet to widespread critical acclaim. It was named Finalist for the PEN/Bograd Weld Prize for Biography. Mark is also the editor and a principal translator of the critically acclaimed The Essential Neruda: Selected Poems (City Lights, 2004). He wrote the introduction to the first ever English translation of Neruda’s third book, venture of the infinite man, a project he developed, published by City Lights in 2017. No more Neruda for Mark, at least for a very long while!

In the early 2000s, Mark was involved in the launch of the Red Poppy Art House in San Francisco. He continues to lead Red Poppy, a literary non-proﬁt focused on Latin American poetry. Their anthology Resistencia: Poems of Protest and Revolution was published by Tin House Books on September 15, 2020. Mark now lives in Mexico City, where he is working on a new book about the revolutionary photographer Tina Modotti.